Marshall Islands flag: National flag consisting of a blue field with diagonal stripes of orange and white that increase in width toward the fly end; in the upper hoist corner is a large white star. The flag has a width-to-length ratio of 10 to 19. 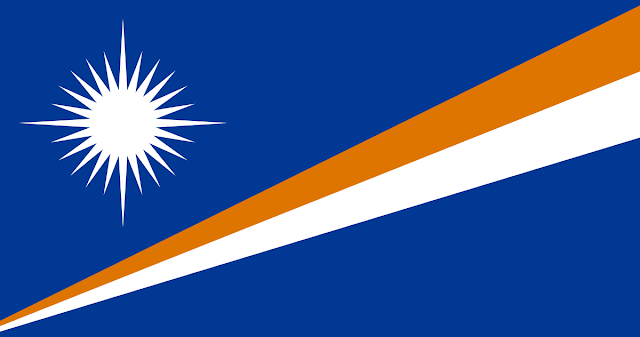 Following World War II, the United States administered as a trust territory the area that later became the Republic of the Marshall Islands. When the first local government was introduced there on May 1, 1979, the occasion was heralded by the hoisting of a national flag, which had been created in a flag design competition. The winning entry was designed by Emlain Kabua, wife of the president of the new government, Amata Kabua. The blue background of the flag refers to the Pacific Ocean, the white stripe stands for brightness, and the orange stripe is for bravery and wealth.

The two stripes together suggest the Equator, which is located slightly south of the Marshall Islands. Growth and vitality for the country are reflected by the increasing width of the stripes. The white star has 24 points, referring to the municipalities of which the nation is composed. The four long rays stand for the capital, on Majuro atoll, and the three administrative centres of the subdistricts. Those rays also suggest a cross and therefore refer to the Christian faith of the Marshall Islanders.