Geographically, the country is part of the larger island group of Micronesia. The country's population of 58,413 people (at the 2018 World Bank Census) is spread out over five islands and 29 coral atolls, comprising 1,156 individual islands and islets. The capital and largest city is Majuro. 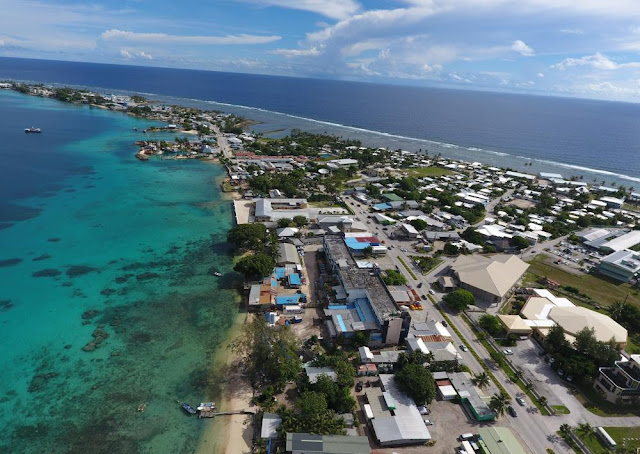 Marshall Islands is the largest portion of its territory composed of water of any sovereign state, at 97.87%. The islands share maritime boundaries with Wake Island to the north,[note 2] Kiribati to the southeast, Nauru to the south, and Federated States of Micronesia to the west.

Micronesian settlers reached the Marshall Islands using canoes circa 2nd millennium BC, with interisland navigation made possible using traditional stick charts. They eventually settled there. Islands in the archipelago were first explored by Europeans in the 1520s, starting with Ferdinand Magellan, a Portuguese explorer in the service of Spain, Juan Sebastián Elcano and Miguel de Saavedra. Spanish explorer Alonso de Salazar reported sighting an atoll in August 1526. Other expeditions by Spanish and English ships followed. The islands derive their name from John Marshall, who visited in 1788. The islands were historically known by the inhabitants as "jolet jen Anij" (Gifts from God). Spain claimed the islands in 1592, and the European powers recognized its sovereignty over the islands in 1874.

They had been part of the Spanish East Indies formally since 1528. Later, Spain sold some of the islands to the German Empire in 1885, and they became part of German New Guinea that year, run by the trading companies doing business in the islands, particularly the Jaluit Company. In World War I, the Empire of Japan occupied the Marshall Islands, which, in 1920, the League of Nations combined with other former German territories to form the South Seas Mandate. During World War II, the United States took control of the islands in the Gilbert and Marshall Islands campaign in 1944. Nuclear testing began on Bikini Atoll in 1946 and concluded in 1958.

The U.S. government formed the Congress of Micronesia in 1965, a plan for increased self-governance of Pacific islands. The Trust Territory of the Pacific Islands in May 1979 provided independence to the Marshall Islands, whose constitution and president (Amata Kabua) were formally recognized by the US. Full sovereignty or self-government was achieved in a Compact of Free Association with the United States. Marshall Islands has been a member of the Pacific Community (SPC) since 1983 and a United Nations member state since 1991. Politically, the Marshall Islands is a parliamentary republic with an executive presidency in free association with the United States, with the U.S. providing defense, subsidies, and access to U.S.-based agencies such as the Federal Communications Commission and the United States Postal Service. With few natural resources, the islands' wealth is based on a service economy, as well as fishing and agriculture; aid from the United States represents a large percentage of the islands' gross domestic product but most financial aid from the Compact of Free Association expires in 2023. The country uses the United States dollar as its currency. In 2018, it also announced plans for a new cryptocurrency to be used as legal tender.

The majority of the citizens of the Republic of Marshall Islands, formed in 1982, are of Marshallese descent, though there are small numbers of immigrants from the United States, China, Philippines, and other Pacific islands. The two official languages are Marshallese, which is one of the Oceanic languages, and English. Almost the entire population of the islands practices some religion: three-quarters of the country follows either the United Church of Christ – Congregational in the Marshall Islands (UCCCMI) or the Assemblies of God.