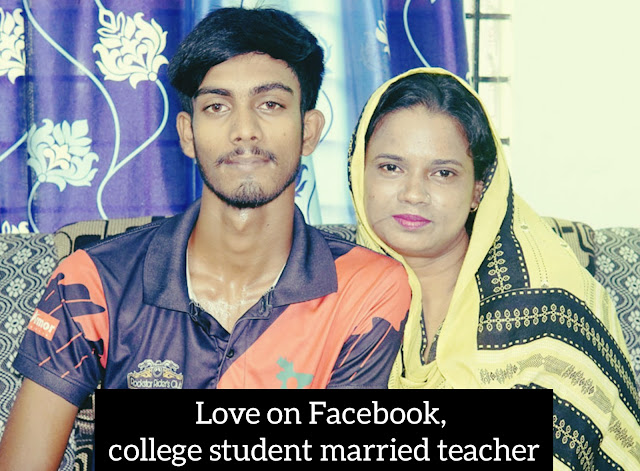 Love means no obstacles. Real example is Mamun (22) and Khairun Nahar (40) couple. They got married after 6 months of love. Their home is at Gurdaspur in Natore. But currently they are living in a rented house in Natore city.

It is known that Gurdaspur Upazila Khubjeepur M Haque Degree College Assistant Professor Khairun Nahar. First married in Bagha of Rajshahi. He also has a child there. However, the family did not last long due to family quarrels. Then many days passed. In the meantime, he met a 22-year-old young man, Mamun, on the social media Facebook. Mamun's house is in Patpara village of Dharabarisha union of the same upazila. He is a second year degree student of NS Government College, Natore.

They first met on Facebook Messenger on June 24, 2021. Then a love relationship develops. Then they got married on 12th December 2021. A few weeks ago, the news of their marriage went viral.

Khairun Nahar said, I was mentally broken after separating from my first husband. There is no decision to commit suicide. At that time, I met Mamun on Facebook. Mamun cheered me through bad times and gave me dreams to live anew. Later we decide to get married. After marriage Mamun's family accepted but my family did not.

Mamun said, comments can never stop the destination. I started my life by organizing my own family without taking into account what anyone said. I want to pray to everyone.