Bullet Train Movie - written by Zak Olkewicz from the book by Kôtarô Isaka. And while it initially looks like it will go off the rails, the result is a violently lighthearted thrill ride. 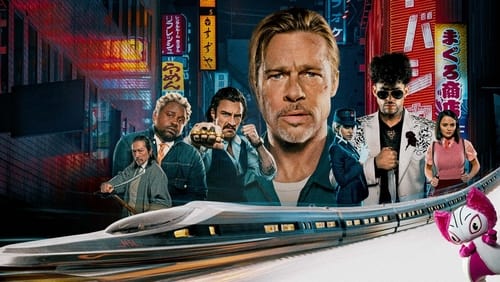 Ladybug (Brad Pitt) is working through his demons as a top criminal and just starting to get back in the game. Because he believes bad luck follows him, his handler Maria (Sandra Bullock), gives him an easy job to start - a simple snatch and grab on a briefcase. But when Ladybug gets on the train, he discovers he isn't the only career criminal present. In fact, the train is full of seemingly unrelated assassins, leading to a mixed-up series of misunderstandings and realizations. Is it really a coincidence that they're all on the same train with the same final destination?

Olkewicz's script starts a little slow and disjointed, seemingly not doing enough to establish his characters. But there is a method to this madness, and it is worth it for audiences to drag themselves through the first half hour to get to the very convoluted and clever story that follows. Leitch's direction of the actors works well with the script, delivering a stylish film that produces good, lighthearted amusement, while also including a few surprise cameos. Some lines are given a bit quickly and are hard to understand, but this is more an effect of the sometimes frantic pace. Pitt and Brian Tyree Henry have excellent screen chemistry together, even though their characters are at odds with each other. Pitt is clearly having fun throughout, and it shows in the natural way he portrays Ladybug. Because of this, it is an incredibly enjoyable performance, if not one of his best roles ever.

Careful cinematography keeps the film from feeling confined to the train, except in scenes where a sense of claustrophobia is needed. There are also some moments of extreme action that are every bit as hilarious as they are impossible. The costumes fit the characters' quirky personalities, right down to the tiniest hair tie. Additionally, the soundtrack keeps the film on pace once the action gets going, although it doesn't do anything to help the earlier pacing issues.

Bullet Train is precisely what it sets out to be: fun, light, and yet exceedingly violent entertainment. While it is a bit slow to leave the station, once it hits the rails hard, it travels at lightning speed to its climactic final stop, where all the lines come crashing together.